Half Past First Cast article August 2020 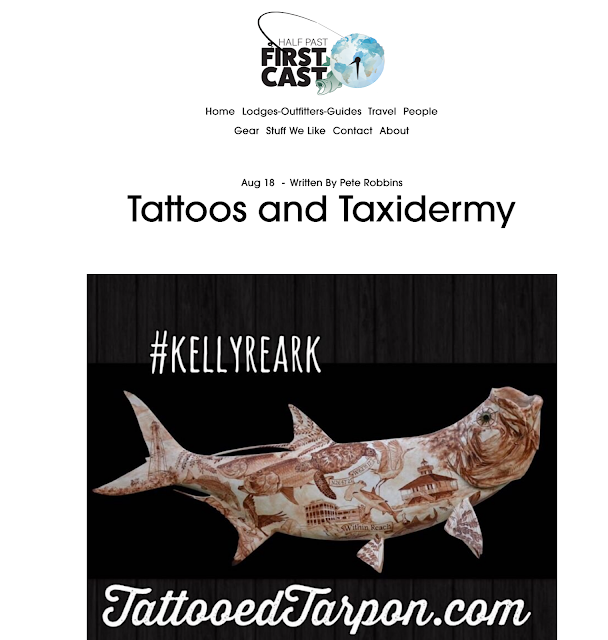 Click the image above to read my article in Half Past First Cast. (or copy and paste this: https://www.halfpastfirstcast.com/blogstuff-we-like/g3f0y5zklt50guvr7lsake4veramnb?fbclid=IwAR0q4AZvOpKkW_lJZsfqfk7X1871niOMh4o74sReFfaQ4Z0sCEly3DMG6tI)
Artist Kelly Reark
www.KellyReark.com
www.KellyReark.FRIOicechests.com
www.TattooedTarpon.com

Popular posts from this blog

May 30, 2019
Each year that I create the artwork for the World’s Richest  Tarpon   Tournament , it is a very special honor to me. I love the Boca Grande fishery for so many reasons. The people I’ve fished with and the exhilaration of catching the mighty silver king are priceless. We are blessed to live in such a special place where the  tarpon  pile up and present us with the spectacle of huge rolling and feeding schools. Watching the crabs run on the tide or a fish evading a large and looming shadow of a bull or hammerhead are sights common here, unlike anywhere else. When I sit back in my chair on a drift off the pass, I often think about my previous  tarpon  experiences. Every single one was an event shared with friends and loved ones that I truly cherish. Fishing is as much about people and relationships as it is about the fish.  This year is a year of setting sons for our fishery. A few of the boats and people that I grew up fishing with or next to will no longer be in the P
Post a Comment
Read more

February 02, 2018
There have been multiple asks for a link to my VIP email signup form. Here is the link! Thank you for your interest in my artwork. The VIP Patrons on my list enjoy advance access to new artwork. Art Launches happen as I complete new artwork. I can't pre-schedule my creative process! My art is in demand and many times the originals sell to my VIP Patrons before ever being released to the public market. This is the singular best way to see all of my new art and have a shot at purchasing it.  Otherwise you will have to wait for me to do a public art launch. :(  Who likes to wait?  Especially when it means most likely missing out on buying your choice of artwork.  For instance, I launched a turtle painting this month (February 2018) to my VIPs and sold it within  minutes . There were a dozen inquiries to that painting. That art is not going to be reproduced as a print, so the patron who acted on the email offering was able to acquire a very special piece of artwor
Post a Comment
Read more

February 02, 2018
What Ladies Day Tarpon Tournament means ... For more than a decade, my mom and I fished the  Ladies Day Tarpon Tournament   together in Boca Grande Pass aboard my dad's boat - the SALTY CRACKER. Mom and I love fishing, and it is something many mother-daughter teams share in this particular tournament. Ladies Day has traditionally been fished on Mother's Day weekend because it is the one weekend during tarpon season when captains would reserve a tide and take their spouses and daughters out on the water to have a family day instead of taking a charter. In the beginning we were all just out there together, taunting and fishing and waiving to the other women in the Pass. Through the hard work of some very special ladies, the first official tournament was fished in 1990. Forward, 27 years later, there is as much camaraderie and competition as ever. There are great prizes and shenanigans too. It's the one big tournament where female anglers flood Boca Grande Pass
Post a Comment
Read more

Kelly Reark Borza
My studio is open to the public by appointment only. Works are on display in public spaces and galleries. DM for list.